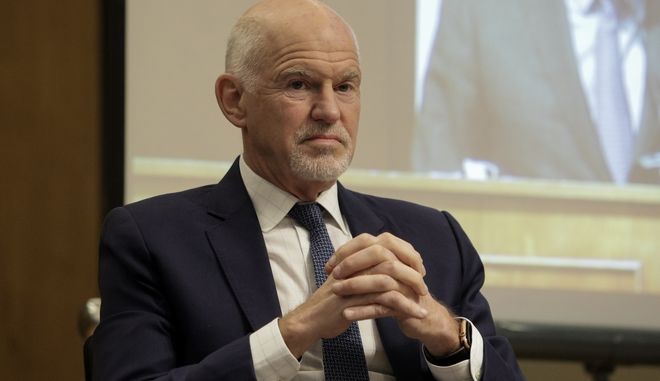 George Papandreou undertakes a mediation, unifying initiative with all the actors and candidates in the Movement for Change.

The president of the Movement for Change, Fofi Gennimata, has also been informed about this initiative of the former Prime Minister George A. Papandreou.

The aim, as stated in a relevant announcement, is "a coordinated and creative course that will lead to the building of a great Progressive Party".

In this context, Mr. Papandreou requested and will have contacts with the secretary of the Central Political Committee of the Movement for Change, Manolis Christoudoulakis, the secretary of the Parliamentary Group and candidate for the election of the president of the Movement for Change, Vassilis Kegkerogous and Nikos Androulaki, Pavlos Geroulanos, Harry Kastanidis, Andrea Loverdo and Pavlos Christidis.

"Creating a climate of unity and consensus around the principles, values ​​and ideals of the Progressive Party, and creating the conditions for the greatest possible consultation and participation of democratic citizens in the internal party processes, is the necessary condition that will lead us to build "a strong faction that will be the dynamic carrier of a progressive proposal of government against the conservative", is emphasized in the announcement by the Movement of Democrats and Socialists.

It is also pointed out that in this effort "we have a duty to be all dedicated, participants and protagonists".

Thessaloniki: A man injured a woman and her son with a sharp object

A bloody incident took place at noon in stumps located on Dafnis Street, on the west side of Thessaloniki. According to the first information, under ...
Read more
COVID-19

The widespread use of health passes and successful vaccination campaigns have helped tourism in the EU recover more quickly from the Cornivirus pandemic ...
Read more
COVID-19

Australia: Border opening is suspended due to the Omicron variant

Th. Plevris: We are on standby - There is no case of lockdown

"Right now, like the whole world community, we are watching the mutation and we expect to have an image in 10-15 days. We have taken the ...
Read more
GREECE

In the establishment of new local addresses, with the abolition of the old structures and their integration in the new local ones, the administration of e-EFKA proceeds, having ...
Read more
SPORT CITY

Belenenses with 13 cases… introduced the "Omicron" mutation in Portugal

Unbelievable but true! The 13 cases of the coronavirus of the Omicron mutation that were detected in Portugal, are all related to the football team of Belenenses. What happened ...
Read more

The work of Dimitris Papaioannou Sisyphus / Trans / Form (2019) will be presented by NEON at the former Public Tobacco Factory, in December. The performances take place ...
Read more
IT HAPPENS IN ATHENS

Lake Vouliagmeni is closed to the public, in order to proceed with the demolition of illegal structures of past decades based on a court decision. The announcement issued by the municipal authority ...
Read more
200 YEARS OF HISTORY

"Towards Plenary Repair - a different approach to the Greek revolution from today's visual artists". 17 December 2021 to 16 January 2022At the same time in two places: At the Cultural Center ...
Read more
IT HAPPENS IN ATHENS

Early in the early morning with the installation of the first construction site, the works of the radical renovation of one of the most central avenues of Athens, of ...
Read more