From unaccompanied minor mentors with the Ministry of Immigration 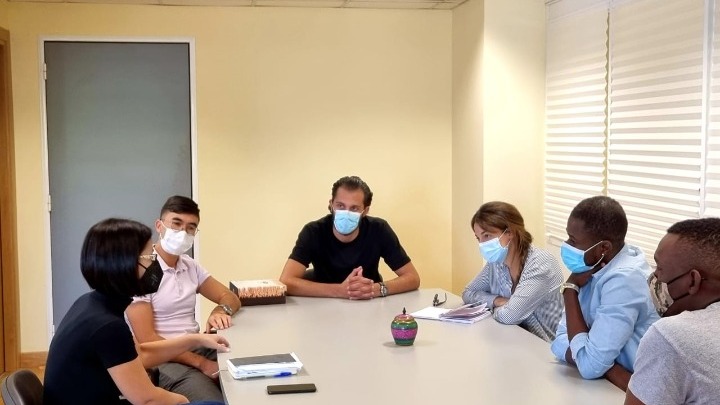 Hady Mohebbi started as an unaccompanied teenager from Afghanistan to come to Greece and five years after this long journey he is studying at the Department of International and European Economic Studies of the University of Western Macedonia and collaborates with the Ministry of Immigration and Asylum. children.

Hady, now 23, describes to APE-MPE that he left Afghanistan because of the war with only a few clothes in his luggage and a math book, which accompanied him throughout his journey.

In 2016 he arrived in Lesvos and after a short stay in the Moria Prison, he found in the hostel for unaccompanied members of the Iliaktida organization, where he was transferred, "the security and the rights that every refugee seeks". Then he decided to enroll in the evening school of the island. Even after he reached adulthood, he continued his evening high school in Thessaloniki and graduated last summer. Then he passed the national exams and went to the school he wanted most. At the same time, he has started distance learning in computer science at the American University of the People, from where he received a scholarship.

As he explains, "I am from the Khazara tribe, the same opportunities were not given to us in Afghanistan. This made us ask, search, have a will in education. Also, from a young age I wanted something big for me, to reach high. I have goals and I fight for them ".

In recent months, Hady has been working through EASO on the Mentorship program of the Special Secretariat for the Protection of Unaccompanied Minors. In this program, four former unaccompanied minors from four different countries of origin, Hady, Amandou Kain Kamara from Guinea, Keita Alasan from Cτοte d'Ivoire and Nourdin Alsahin from Syria, provide individual mentoring to each step-by-step guide. of their course in Greece.

"We have all come here as unaccompanied at different times, so we have experienced all the difficulties that children are experiencing now and that makes us understand their concerns and problems. We talk to them and take their problems to the ministry. "We work as a bridge between the ministry and the children." He points out that the most important thing for the four mentors, "what opened many doors for us was to learn the Greek language and go to school. We explain to the children that this will help them in every part of their lives, in the labor market, in their integration ".

Anxiety about the legal status

The most important issue that unaccompanied children discuss is, according to Ivory Coast's 27-year-old mentor Keita Alasan, their legal status, as they worry about what will happen if they do not seek asylum. Keita answers them with his own story. He came to Greece in 2010 as an unaccompanied minor and sought asylum at a time, as he describes in the APE-MPE where the protection of unaccompanied children was limited, there were not enough hostels or financial support. At the age of 16 he had to stay in a 50 square meter house with 17 other people. "I was shocked. "I had to stay there for a year and to make money I collected glasses, shoes, clothes from the garbage and sold them," he recalls. Then, he found a place in a hostel in Athens, so he decided to go to school. "In the beginning I went to school just to pass my time, but little by little I started to be more interested, I had very good teachers who made me want to continue school" he says and adds: "But at night I cried in the hostel because I did not know what would happen, it was the worst moment in Greece with the crisis and I was afraid ".

After graduating from high school and working as a translator at Praksis, Keita made the coveted asylum decision: no. "It was the biggest shock for me. "Even though I had finished school here and was working, I was told that I had to leave the country." Keita was very disappointed, but managed to get a residence permit due to his seven-year stay in the country. He conveys these experiences to the children he meets in the hostels and semi-autonomous living quarters, which he visits with the other mentors. "A child can describe to me that he is disappointed that he did not get asylum. I have exactly the same story. And then he feels that he has hope. I tell them to learn the language, not to sit at home, to go to school, to seize any opportunity given to them. "But also not to get involved in anything illegal," he says.

Undersecretary of State for Immigration and Asylum Sofia Voultepsi describes the Mentorship program as an "emblematic initiative that will bring about substantial changes in the reception conditions for unaccompanied minors" and expresses her belief that the program "will be a good practice for other EU Member States". ».

"With this program we achieve a double goal", points out to APE-MPE the special secretary for the Protection of Unaccompanied Minors, Irini Agapidaki. "On the one hand, we give opportunities to people who have succeeded in our country, are integrated and can function as role models and integrate others. "On the other hand, as a policy-maker, we also receive valuable information about what we are trying to plan." The role of the mentors, according to Ms. Agapidaki, is "the empowerment, support, facilitation with the children, as well as the feedback to the ministry for the actions we develop".

The program is implemented with the support and funding of the European Asylum Support Office (EASO).

Honduras presidential election: A clear lead for the left-wing candidate

Afghanistan: The Taliban have called for EU assistance to operate the airports

The Taliban asked for the help of the European Union for the operation of the Afghan airports during the negotiations in Doha at the weekend, while they pledged ...
Read more
984

The Omicron variant spread to other countries on Sunday, with the detection or confirmation of cases in the Netherlands, Denmark and Australia, ...
Read more
984

Up to 30% increase in real estate transfers

Only 33 days have at their disposal thousands of sellers and buyers of real estate to proceed to the conclusion of purchase and sale contracts as from 1/1/2022 ...
Read more
984

New homicide with a 48-year-old victim in Thessaloniki

A new genocide was committed on Sunday night, this time in Thessaloniki, where a 49-year-old man from Armenia killed ...
Read more
984

High Schools: Changes in Assessment - What applies to the score

On January 20, the first four months in high school are completed and the students are in… examination environment as from this year the way of their evaluation has changed ...
Read more

Municipality of Athens: In Exarchia, the Sunday cleaning company

The area of ​​Exarcheia was today at the center of the cleaning and disinfection operation, by the competent teams of the Municipality of Athens, in the context of Sunday ...
Read more
984

Early in the early morning with the installation of the first construction site, the works of the radical renovation of one of the most central avenues of Athens, of ...
Read more
CIVILIZATION

The Christmas Factory: The largest Christmas village opened its doors in Technopolis

The happiest and safest Christmas park in the city opened its doors in the Technopolis of the Municipality of Athens. The Christmas Factory, the largest, safest and ...
Read more
IT HAPPENS IN ATHENS

The Municipality of Athens distributes 350 tons of food to 25.610 needy people

The Municipality of Athens, implementing a wide network of actions, has opened the umbrella of social solidarity, giving valuable "breath" to thousands of households that find it difficult to ...
Read more
IT HAPPENS IN ATHENS

The planning of the municipality of Halandri for the integration of the ancient Aqueduct into the daily life of the citizens is being implemented step by step and thus to be a "living" element ...
Read more